The Elephant in the Blueprint 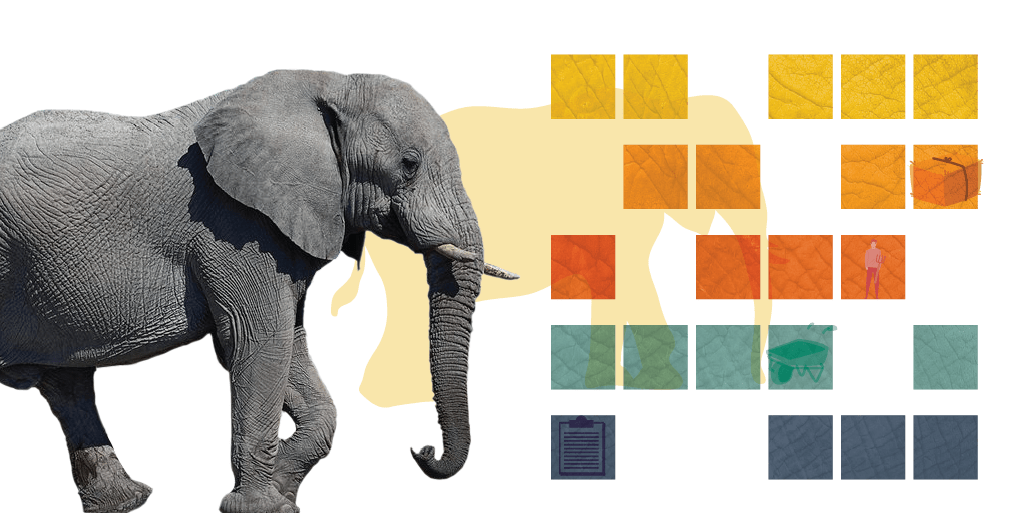 Author’s note:
We were preparing this series of posts in a very different world. As service designers, we have a keen awareness of the power of place and delivery channel. Covid-19 has disrupted the zoo experience, but it has more online events and virtual education. That said, we can’t wait to visit our local zoo soon.

In Part One, we visited the zoo to test out a new service safari framework. The framework was providing us the reference for the guest’s experience, but we started to wonder what if we made the elephant the protagonist?

The setting and the actors at the zoo elicit novel design problems, not many of our clients need to be concerned with troubleshooting a tiger escape! We practice human-centered design by researching and designing for service providers and the people who interact with those services, but what about the elephant in the room? Yes, I know it’s called human-centered, but what if for this project we expand it to animal-centered design? We set out to test the boundaries of service design by examining the experience of the elephant.

I held the designer role at the zoo for over 10 years, and part of my job included exhibit design. The exhibit design process is divided by the animal side and the guest side. The guest side consisted of a multidisciplinary team including multimedia (design), animal care staff, curators, horticulture, maintenance, and education, with a rotating list of leaders dependent on focus. The animal side of the exhibit was usually outsourced to an architect, with input from some of the same zoo staff—mostly curatorial. While we attempted to bridge the animal and guest exhibit experience, the people and processes are mostly separate.

(There are notable exhibits that blend the guest and animal spaces and even allow interactions outside of a petting zoo. For example, Philadelphia Zoo created a system of exhibitry that allows for monkeys and tigers to traverse over the heads of the guest. The Indiana Zoo’s Simon Skjodt International Orangutan Center has an area where guests can play interactive games via a touchscreen with orangutans.)

While improving the guest experience was rewarding, I was more interested in enhancing the experiences the animals were having. As one does when curiosity piggybacks on an existential crisis, I decided to go back to graduate school (I kid, sorta)!

In school, my thesis focused on digital enrichment under the umbrella of animal-computer interaction. Broadly, ACI is about interactions between non-human users and technology, examining sensory range, cognition, communication, problem-solving, and culture. My research with orangutans relied on methods of behavioral observation: is the individual expressing stereotypic behavior? It also looked at time spent with the interaction and feedback from their regular zookeepers.

This specific background with exhibits and ACI inspired what we did next.

How Does a Pachyderm Fit In Service Design?

Nonprofits take great measures in knowing their customers. At my time at the zoo, I could tell you the target guest had 2.5 children and came from certain counties in the Atlanta metro within a 35-minute commute. However, that same care and research rarely extended to nonprofit employees.

In service design, we put an emphasis on researching and designing for the work being done frontstage and backstage. Backstage, in this context, includes the actions and processes done by zoo employees and volunteers outside the view of the zoo guest. The purpose of understanding the employee/backstage experience is more than improving operations; it’s a critical step to improving the frontstage guest experience as well. In the case of the zoo, digging into how a zookeeper works backstage can reveal opportunities to better improve the guest experience.

But what about the elephant? Should a service designer care about their experience? Could understanding them as a service actor better inform the design of service?

In Donna Haraway’s The Companion Species Manifesto, she breaks down the animal-human divide by asserting the dog and human relationship is uniquely distinct, a ‘significant otherness.’ And while her manifesto focuses on the companion-animal relationship, I referenced it in my ACI work as the ability to use this novel lens to look at interactions with non-humans. Our hypothesis in this exploration was understanding the “other” and its relationship and actions in its environment are important to understanding and improving the service as a whole.

During our service safari mentioned in our previous post, we were able to talk to an elephant zookeeper and asked them if they felt the elephants enjoyed their new exhibit. The zookeeper made a point that not only did it seem to him that the elephants were much happier, but that it also made his job easier. For instance, the increased space allowed the elephants to distance themselves if there was an elephant squabble, but it also made their zookeeping job easier by allowing more space for their equipment. With this in mind, it’s easy to see that a happier elephant could equate to a happy zookeeper.

In service design, we use service blueprinting as our tool of choice for describing how services work overtime, across multiple actors and touchpoints. The team saw service blueprinting as an excellent way to examine the non-human and human relationships in the elephant exhibit. This allows us to map touchpoints, processes, actions, and multiple actors—guest, zookeeper, docent, and elephant. We decided to blueprint a key scenario—midday, mild and sunny, not too crowded, and the elephant needed to move to the backstage area (the elephant barn). First, the team who experienced the service safari took the first pass at the blueprint through the lens of the guest as the main actor, and then tested our findings with the zoo’s designer.

Through the exercise, we were able to see some compelling findings on our post-it notes. We can see how important food is for motivation for the elephant (look for the post-its labeled ‘eats’). The guest’s physical journey through the exhibit is highly influenced by the actions of the elephant, seen by the relation of actions between elephant and guest. We also noticed the lack of touchpoints in areas important to the guest’s journey (no clear entrance sign, lack of wayfinding towards the barn, etc.).

What’s Next: The Pachyderm Protagonist

The first row of the blueprint is the main actor we work with in mind—the protagonist. We considered focusing on the zookeeper to further flesh out service design opportunities. This would have included blueprinting additional zookeeper scenarios: start and end of the day, training exercises, or inclement weather procedures.

And here’s where things can really get groovy - we can place the elephant in the main actor role. While we can’t interview the elephant and we would have to be careful to avoid anthropomorphizing their behavior, we could use the same methods honed in my ACI research—behavior observation, timing interactions, and keeper insight. This could not only be useful for blueprinting but also journey mapping and other tools. Placing the elephant in the protagonist role might help illuminate problems and opportunities in creating a better experience for all zoo actors and guests. And it not only might help in obvious situations - such as building a new habitat, but it could also illuminate interactions such as feeding, training exercises and enrichment activities. After all, the elephant experience should pull more weight in the design.

How much do we need to understand about business strategy to be effective as service designers?

Read More
What are the Differences Between Service Design and UX Research?
Stephen Taylor

I often get asked questions about the relationship between service design (SD) research and user experience (UX) research. The answer is very simple, but communicating that simplicity is not easy. This post will attempt the briefest, clearest answer possible.

Read More
Strategic Design in Organizations | Course
This Is Harmonic

During this two-part course, Carol Massa will expand on the role of service design in organizations today, share insights on how to identify design challenges from an inside and outside-in perspective and, ultimately turn these insights into actions by closing gaps between people, process, policies, platforms.